The LDS church, which Mormons call "The Church of Jesus Christ of Latter-Day Saints", teaches that the Bible cannot be trusted. In what they consider to be Scripture, they teach:

Now I would definitely agree there are some bad “translations” out there (such as the JW’s New World Translation), but if English translators get it wrong, going back to reliable ancient manuscripts to find out what was originally written, is a solution to find out what the original authors had penned. However, that is not what the LDS church is talking about when they use the term “translate”.

So that there is no confusion, let’s allow the LDS church to define what they mean by “translate”. Mormons are taught “translate”....

At this point I would warn that to view the Bible as corrupted by man, is to also view God as incapable of keeping His Word from becoming contaminated. If they were so precious, wouldn’t you think an Almighty God would have been able to preserve and protect anything from becoming missing from His holy writings?

The Mormon will not see this as a problem though, because they see it as something prophesied long ago that this “taking away” from God’s Word would happen. Any serious student of the Bible will see right away that the burden of proof lies with the one who claims ancient manuscripts had disappeared. Do Mormons have any “proof”? What solution did God come up with according to Joseph Smith Jr.? Well, Mormons say what was lost can be, and was, restored. God using someone to restore what was “missing” is the foundational reason for the very existence of the LDS church.

[Robert J. Matthews was a Mormon religious educator and scholar who taught in the departments of Ancient Scripture and Religious Education at BYU in Provo, Utah. He served as Bishop, High Councilor, Stake President, Patriarch, Temple Sealer, Home Teacher, and as a Sunday School Gospel Doctrine Teacher. He served on many Church committees, including the Correlation Committee and the 'new' LDS so-called scriptures. He was especially noted for his efforts concerning Joseph Smith and his translation of the Bible.]

According to the LDS church, the Joseph Smith Translation (JST) is a....

Notice Joseph Smith Jr. did not use ancient manuscripts (he did not know the languages), but he did the “translation” (or rather, the supposed restoration of what was apparently missing) from the King Jame Version.

In their Pearl of Great Price there is a section called the Book of Moses (also written by Joseph Smith Jr.). There, a conversation transpires between God and Moses (which Mormons view to be the same Moses as in the Bible). In it, it says there is one whom God will raise up like Moses....

What did Moses write? The Pentateuch, which begins with Genesis. Mormons see this to mean that much of what Moses wrote would end up missing because of corrupt men. The timing is set at the time of Moses where God tells him that the taking away from the book will happen in the future. God then supposedly tells Moses He will raise up someone like him. Who is this being talked about? Is the Pearl of Great Price speaking of Jesus? No, to Mormons this is none other than Joseph Smith Jr. Yes, the very same person that penned those words.

Now since this conversation was supposedly between God and Moses, is there anything in the Bible that verifies this? No. Again, to Mormons this is one of those “many precious things” that was apparently missing. How are we to test these things by the ancient Scriptures if those very writings are no longer available? What Scriptural proof does the LDS church have for pointing to Joseph Smith Jr. as the one through whom these needed “restorations” take place? Mormons will point to Genesis 50:31-33.

Before you read that, the book of Genesis ends in verse 26 of chapter 50. What you are about to read is what Joseph Smith Jr. ADDED!!! It is not found in ANY ancient manuscripts....

The LDS church taught Joseph Smith, Jr. descended from Joseph of Egypt. The BofM even records....

So not only did Joseph Smith Jr. write himself in the Holy Bible, and pointed to other writings HE WROTE to verify this, he even placed himself as INSTRUMENTAL IN BRINGING PEOPLE UNTO SALVATION. This places all control upon the LDS church which claimed:

No one but Jesus Christ has the keys of authority!

God is Almighty and His preserved Word can be trusted! Jesus Christ alone is the source of Salvation! He did not give His keys of authority to anyone. This means you don’t need any person or organization to pull you into relying on an "authority" they have absolutely no possession of for your salvation. You can have full and complete confidence in the finished work of the Lord Jesus Christ. Reliance upon anyone else is to turn your back on Him. 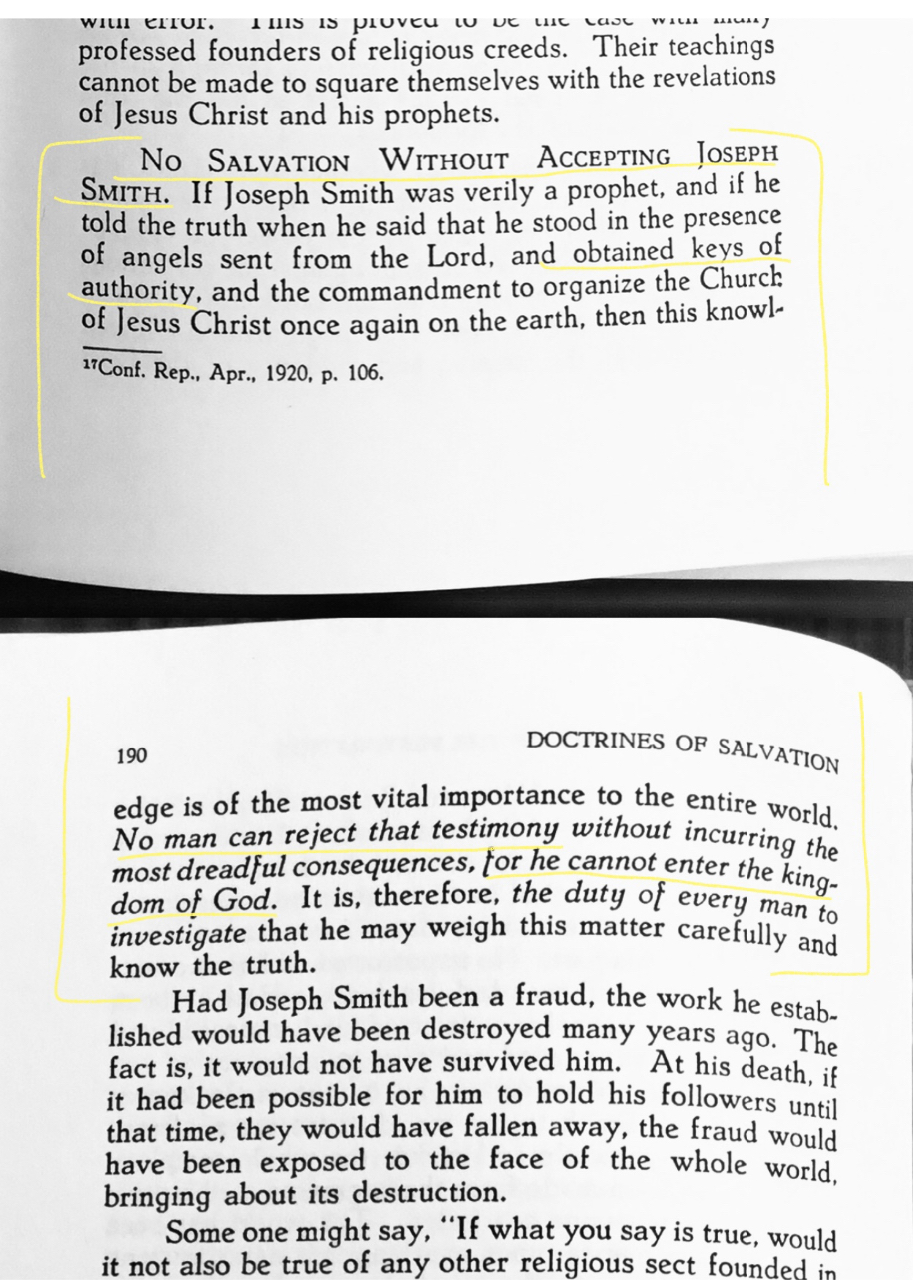