The May 1/97 issue of the Watchtower magazine contains a question from a reader on pg. 29, which stems from a major change in the wording of the Why Awake Is Published statement that is found on pg. 4 of every issue of the Awake magazine. This change occurred on Nov. 8/95 and reads in part, like this:

“Most important, this magazine builds confidence in the Creator’s promise of a peaceful and secure new world that is about to replace the present wicked, lawless system of things.”

For many years previous to Nov. 8/95 it read this way:

“Most important, this magazine builds confidence in the Creator’s promise of a peaceful and secure new world before the generation that saw the events of 1914 passes away.”

It is good to ask questions, and the Watch Tower organization realized that this important change needed to be addressed, because it involves issues like, ‘the length of a generation’, and ‘the calculating and setting of dates and events’, which reflect upon the most important standard of all... Truth.

The Watch Tower organization identifies itself as the only true channel on earth that Jehovah God uses to proclaim His truth to the world, and so their followers confidently look to the organization for this truth as nourishment, thereby, providing spiritual perspective, guidance, and sight; and based on this premise, if I were a Jehovah’s Witness, I would too.

Now, when it is declared in print, for many years, that Jehovah the Creator promises that the generation that witnessed the events of 1914 will not pass away before the new world is established, wouldn’t Jehovah’s Witnesses accept and believe it as God’s truth? Certainly; because after all, it is the Creator’s promise not man’s promise. Man can be wrong; the Creator cannot. And the Bible does counsel us to let God be true and every man a liar (Romans 3:4).

I think that the reason that readers of the Watchtower and Awake magazines might ask questions like the one on pg. 29 is because, whether you calculate the length of a generation in the Biblical way or in 21th century thinking, a generation is a generation, and the people that saw the events of that specific year of 1914 have virtually, if not literally all passed away, thus presenting a huge problem regarding the fulfillment of the Creator’s promise.

Since we know that God cannot fail, then the appropriate thing for any God-fearing organization to do, would be to humbly admit that it was not God speaking, but themselves?

One thing I have learned during my life when faced with prospects of a ‘bad call’ or an unhealthy choice I have made, especially when it affects others, the natural tendency is to protect myself and save face. Could it be that the Watch Tower, instead of admitting making a 'very bad call' on an extremely serious matter, chose rather, to attempt to extend the length of that 1914 generation, to buy more time on their prophetic clock, and then calling this adjustment "Improved understanding" and even going so far as to state that it isn't needful to calculate or set dates of future events?

Well, what is disturbing to me about this “improved understanding” and “setting of dates” is this:

The Christian churches, which the Watch Tower has labeled as followers of Satan, that is, Christianity in general, has from the beginning heeded the warnings of Christ about not calculating and setting dates, yet the Watch Tower in its brief 100+ year history has many times speculated, calculated, and fixed dates of events. Some examples are 1874, 1914, 1918, 1925, 1941, 1975, and most recently of course, the generation of 1914.

How much ‘improved understanding’ does the organization that wears the name of Jehovah need, to know what the ‘so called’ followers of Satan knew all along? In fact, 1914 and 1935 are calculated and fixed dates that Jehovah’s Witnesses still hold to be God’s truth.

Still further to the prophetical claims already noted in this article, it would seem that the Watch Tower thought it 'most important' in recent years to actually  remove 'Why Awake Is Published' including the errant claim from the Awake magazine altogether.

I don’t know if readers of these magazines accept the explanations given by the organization or not, but I do know this. As a Christian, I have never nor will ever need to have a fixed year, for example, for the return of Christ because that would be laying a false premise, leading to a false hope, and I may even influence others into that same error. Jesus taught that it is not for us to know the exact time of His return. He said that He would come as a thief. Do you think that a thief would ever tell you when he is going to steal from you? Would I be so arrogant as to think that the Almighty would trust me or you or any group with information of such great significance? (Matthew 24:42-44)

No, as a Christian I already have security, peace and assurance that my Lord will return... In His time... Not mine. 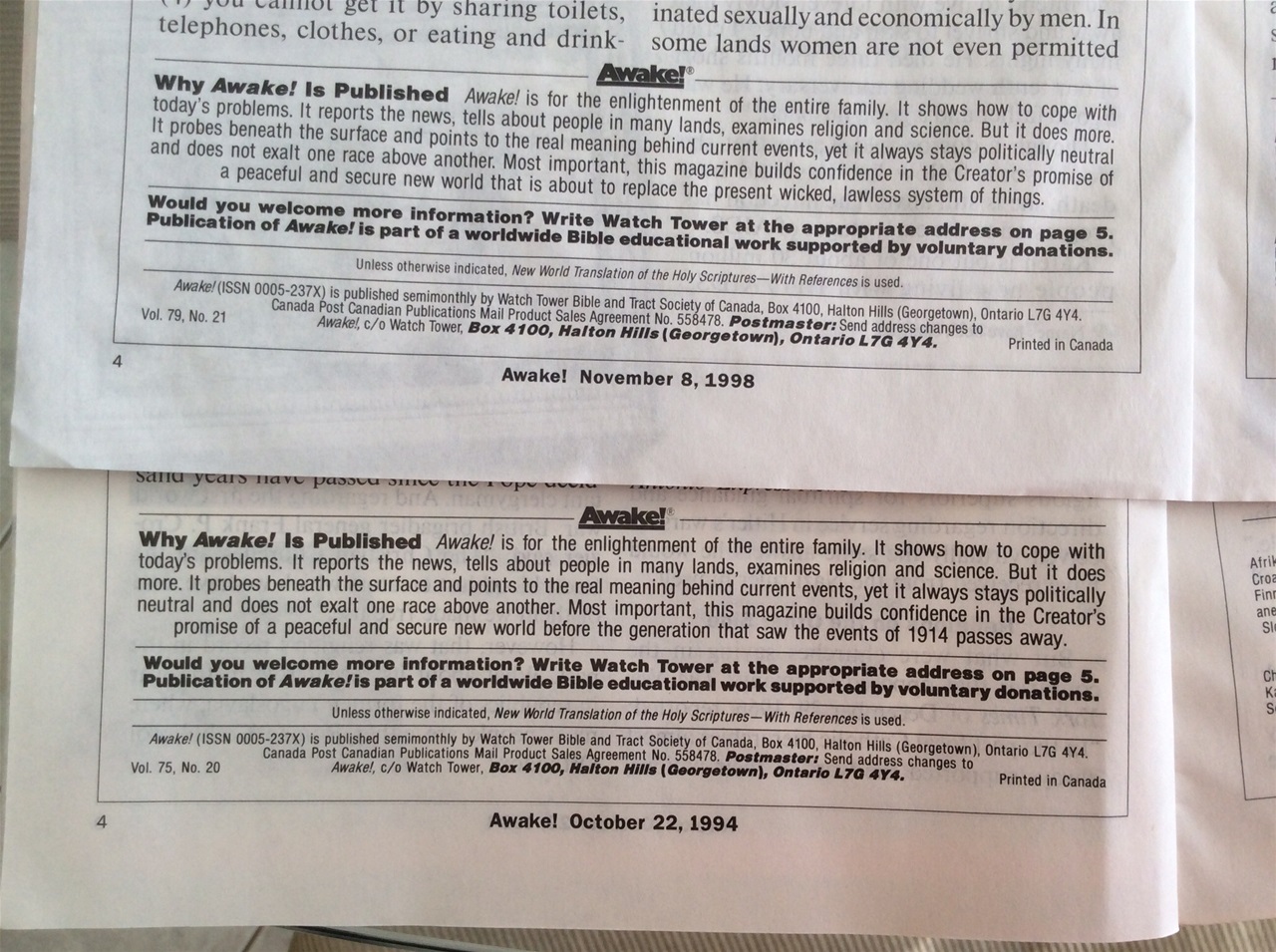 The Watchtower's announcement that "the Creator's promise of a peaceful and secure new world" will be established "before the generation that saw the events of 1914 passes away", is false. They removed this announcement (from Awake magazines), extended the time period and explain these changes as further understanding. Now that you have this information, below is a suggested witnessing conversation that might be helpful.

It's always a good idea to use the Watchtower's own material and/or the Bible to witness to them. Photocopies and tracts will most likely cause them to draw away from discussions. Since most Christians will not have access to earlier Awake magazines that have the above "promise of the Creator", I have provided links for you from their own website that will provide some information for discussions into this matter. They will look at their website, JW.org, but don't try to show them anything from other websites.

The present wicked system of things, which extends worldwide, entered its last days in 1914, and some of the generation alive then will also be on hand to witness its complete end in the "great tribulation."

(8) Last days: They believe that we are living now, since 1914, in the last days of this wicked system of things; that some who saw the events of 1914 will also see the complete destruction of the present wicked world; that lovers of righteousness will survive into a cleansed earth.

Say: "Notice that some of the people who were alive to see the events in 1914 will also be alive to see the complete destruction of this present wicked system of things. This GROUP (good to use this word) of people will all be over 100 years old now. Is this now found to be FALSE information the Watchtower has provided?"

The Jehovah's Witness will most likely try to explain that "generation" includes two overlapping groups of people.... one being contemporaries of the other. That's ok. Allow them to try to explain this. While they are doing this, go to...

Show them the picture, then ask: "Is this what you're talking about?" They will say, Yes." Say to them, "Remember that Reasoning From the Scriptures clearly identifies some that saw the events of 1914 will still be alive. That's group 1. But notice that here it clearly shows all from the first group will be dead, and that only some from group 2 will still be alive. Obviously one of these must be FALSE information."

The Jehovah's Witness will be in a dilemma because they are to fully trust the Watchtower as God's faithful slave He uses to communicate accurate knowledge to them. The majority of them will have unwavering devotion to the Watchtower. They will, at this point, want to defend it with everything they have. Here's what I have found helps calm the storm.

Say, "If you're able to provide me with more information that will help, I would be appreciated." They may refer you to watch a broadcast http://tv.jw.org/#video/VODStudio/pub-jwb_201509_1_VIDEO which does not give answers to their dilemma. (Link may take you to current program. Choose JW Broadcast - September 2015 to watch).

Whether or not they have directed you to other study resources, you could ask them when they could meet with you again. By doing this, you have given them the responsibility to research and follow up with you.

Say to them, "I'm not as concerned of someone telling me God promises this or that. I do not question God's promises, but we need to be careful not to just believe what someone says what His promises are. We need to discern His promises by the Scriptures. But there is something far more important than those things He promises." They may give you an odd look.

Give them an analogy similar to mine, "My best friend promised to have breakfast with me on Saturday. Now, I am more excited about enjoying time with my friend than I am about what I'm going to eat. That's kind of the same thing with God. Enjoying what He promises is not as important as enjoying His presence."

Tell them you're looking forward to meeting with them again on (?). By leaving them with this, you challenge them to research and had given a small taste of your testimony.

It's Interesting that now the Watchtower is claiming there are 2 "This Genereation" groups. Those who were alive in 1914 and those anointed before the first anointed group died.

According to the Watchtower, 1914 is a significant date. They say Christ is said to rule as king from heaven at that time. http://www.jw.org/finder?locale=en&docid=1102005159&prefer=lang&srcid=share

If Jesus came invisibly in 1914 as Jehovah's Witnesses are taught, then all the saints must have come with Him according to 1 Thes.3:13...or is He coming twice or to the earth? Huh?