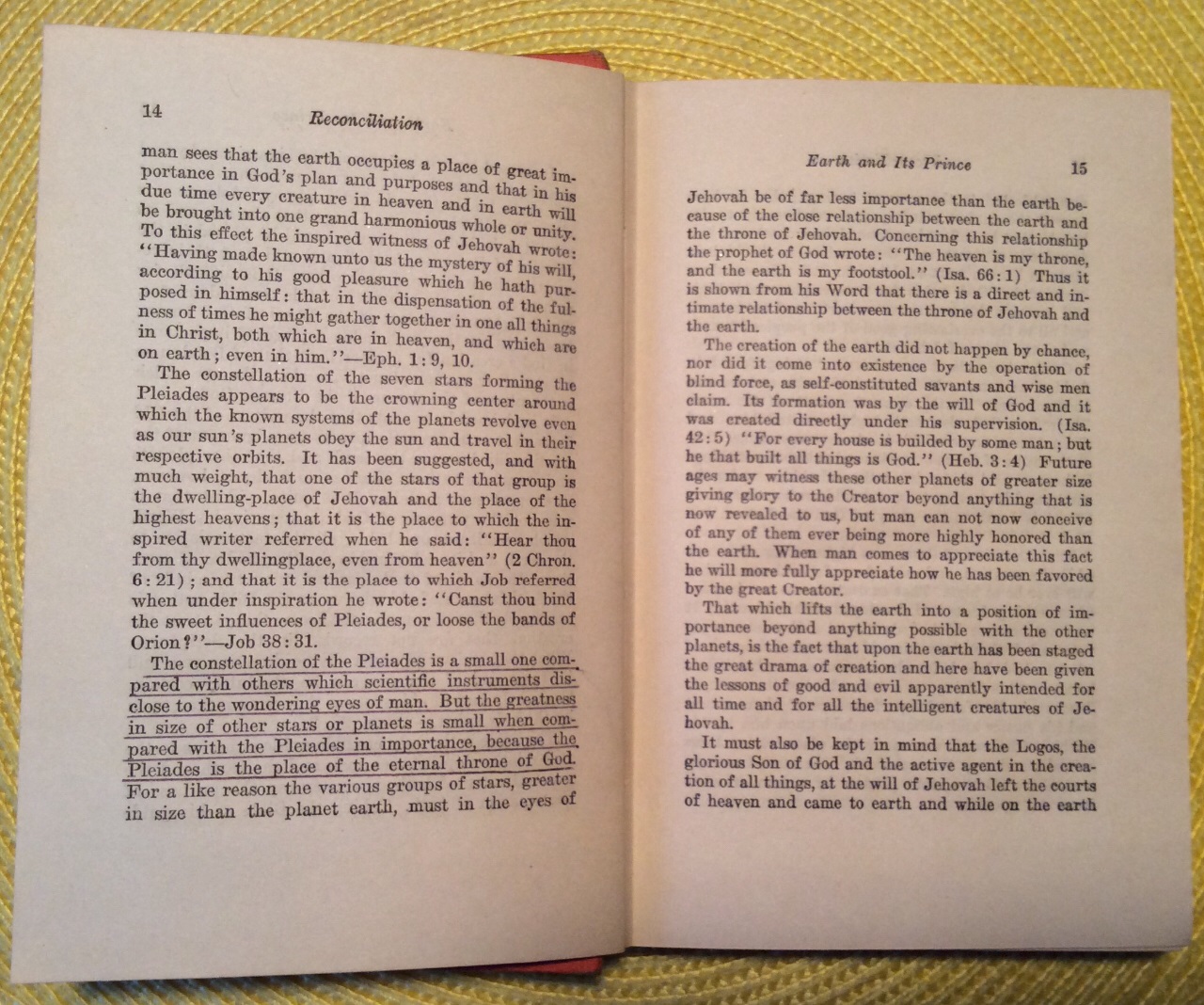 WHERE DOES JEHOVAH LIVE? 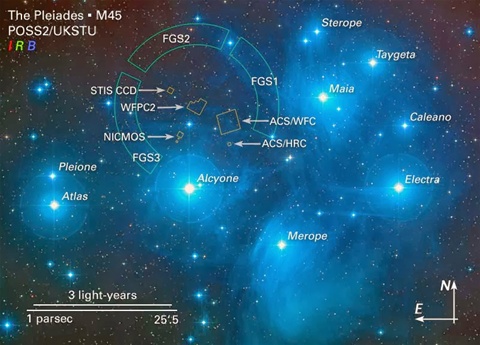 From 1881 to 1953 the Watch Tower Bible and Tract Society reasoned and taught that God resided in the vicinity of the star cluster known as the Pleiades, the bright star being Alcyone. They belived that this region was the absolute centre of the universe. The idea was supported by citing a few Old Testament verses (Job 3:31, Amos 5:8) and also by studying the position and dimensions of the Great Pyramid in Egypt, which Watch Tower writings even called God’s ‘Stone Witness’. (Studies In The Scriptures, Thy Kingdom Come, 1891, p.327)     Sound like Pyramidology?

“But the greatness in size of other stars or planets is small compared with the Pleiades in importance, because the Pleiades is the eternal throne of God.” (See photo at the top of this page)

Over time, with vastly improved technology and greater astronomical study, we of course now know that the universe is much larger than we had previously thought, even immeasurable.

Watch Tower theological ignorance was once again revealed and in 1953, they discarded the teaching.

Since the Pleiades are part of the created things, how can they be eternal?

Did the Creator, who is eternal, not have a place to dwell until He created one?

If the questions seem shallow it may be because Watch Tower concepts seem shallow compared to the depth of God’s eternity. God’s word is emphatic on this:

“But will God really dwell on the earth? The heavens, even the highest heaven, cannot contain You. How much less this temple I have built.” (1 Kings 8:27)

Perhaps the Witnesses of Jehovah might respond that it was ‘old light’ or ‘present truth’ and that now they have ‘brighter light’.

Really?  Really confusing. That fact is that J.F. Rutherford’s assertions were never accurate knowledge. He merely thought that it was truth as did his predecessor C.T. Russell and their hopeful followers believed them.

In regard to the organization that calls itself the only channel on earth that God uses; instead of the appearance of red faced embarrassment, perhaps expressing even a trace of humility, we are shown the lily white face of spiritual pride, ever proclaiming that the light is getting brighter. Such darkness!

Glory to the Father of all the bright lights in the heavens, in whom there is no variance, no shadow, no changing and no confusion!

So then, where does God live?

As immaculately as His presence is demonstrated throughout His immense creative physical masterpiece, His scope is way beyond finding out, further than the outskirts of infinity. He is utterly transcendent!

There is yet something even more full of wonder!

God who plays no favorites is pleased to dwell with and in anyone who will personally receive His Son Jesus as the final sacrifice for every sin and the justifier of any and all who come to Him alone for salvation. (Romans 4:5, John 6:37, John 14:6)

This immanence is made entirely possible through the promise of the indwelling Holy Spirit. (1 Corinthians 3:16, John 14:17, Romans 8:9)

I doubt that I can even scratch the surface of comprehension regarding the nature of God, Divine and Incarnate, but may I offer a perspective?:

As for any who would become interested and involved in knowing the affairs of the Most High, may I say?

If we would know who God really is, we would very quickly humble ourselves and ask,

“Who do we really think that we are?”

We must understand that any place where God is said to dwell, live or be present, whether it be past, present or future, cannot confine Him nor restrain Him.

God reveals Himself through the Bible and in the person of Jesus Christ; His life, death and resurrection!

All correspondence is confidential

"Give me that old time religion," used to be a song people believed in. Now it is all about relationship with our creator, which never really changed. Amen.