DNA and the American Indians

What Does Mormonism Teach?

American Indians are Descendants of Israel that Traveled Across the Ocean

The LDS church (Mormons call it "The Church of Jesus Christ of Latter-day Saints") claims that the American Indians are descendants of Israelites who traveled to the Americas in the 6th century BC.

From the Book of Mormon it is taught that a character named Lehi was the patriarch of the American Indians. Two of his sons were Nephi and Laman. They both became the fathers of two great nations - the Nephites and the Lamanites. The Nephites were light skinned people, and the Lamanites were cursed with darker skin. See the Book of Mormon: 1 Nephi 12:23; Alma 3:7; 2 Nephi 5:21. See also History of the Church of Jesus Christ of Latter-day Saints, 7 vols., pp. 44-45.

We are told in The Book of Mormon how Lehi and his family travelled by ship across the ocean. The people were so great that they spread throughout the great land:

Laman is The Ancestor of The American Indians

The introduction to the Book of Mormon reads (See note at bottom of this page about changes made): "After thousands of years, all were destroyed except the Lamanites, and they are the principal ancestors* of the American Indians." See also Doctrine & Covenants: 3:18-20; 19:27; 28:8; ; 54:8; 57;  These are supposed "revelations from the Lord" that Joseph Smith claimed to receive about the Lamanites. See also the Book of Mormon: Moroni 1:4.

These sources are considered by members of the LDS church to be Mormon Scripture. They clearly teach Native Americans descended from Semitic racial stock.

The Lamanites Numbered in the Millions

The Book of Mormon is very clear in its claim that Israelites migrated and populated most of the American continent. All of the early LDS church leaders believe the American Indians are primarily descendants of Laman. The Book of Mormon describes great civilizations numbering in the millions. According to the Book of Mormon, a quarter of a million Nephite men, women and children were killed in just a single day. This means multitudes upon multitudes of Lamanite were thought to have battled in the final slaughter of the Nephites.

The Book of Mormon reads:

“And it came to pass that my people, with their wives and their children, did now behold the armies of the Lamanites marching towards them; and with that awful fear of death which fills the breasts of all the wicked, did they await to receive them.

And it came to pass that they came to battle against us, and every soul was filled with terror because of the greatness of their numbers.” (Mormon 6:7-8)

What are the Facts?

Archeology reveals The American Indians migrated via the Bering Strait

“In the Americas, a look at native tribes shows that they are not all blood brothers. The three main groups classified by language, were found to be genetically distinct, suggesting that three separate populations from Asia may have crossed the Bering Strait at different times to settle in America.” [page 47]

There is no sound historical evidence for the Book of Mormon's claim that Hebrew immigrants came to the Americas in pre-Columbian times. According to the Smithsonian Institution, archeological evidence shows that the Western hemisphere was populated by East Asian peoples migrating across the Bering Strait and rules out "alternatives involving long sea voyages" as a significant contribution to New World settlement:

“There is no good evidence for immigration via other routes before Norse arrivals from Greenland and Newfoundland about A.D. 1,000, and if other early voyages occured, they were insignificant for the origins and composition of New World populations.” ["Origin of the American Indians," National Museum of Natural History-Smithsonian Institution, WashingtonD.C., 1985, p.1]

There are no scientific evidences for the Book of Mormon premise that the Native American Indian peoples of North, Central, and South America came from Semetic stock. To cite the words of a 1985 Smithsonian Institution paper on the subject:

“The American Indians are physically Mongoloids and thus must have originated in eastern Asia. The differences in appearance of the various New World tribes in recent times are due to (1) the initial variability of their Asian ancestors; (2) adaptations over several millenia to varied New World environments; and (3) different degrees of interbreeding in post-Columbian times with people of European and African origins.”

"The physical type of the the American Indian is basically Mongoloid, being mostly related to that of the peoples of eastern, central, and northeastern Asia." (See photos at bottom)

A discovery of what is believed to be the oldest human remains of a boy (MA-1), was found in south-central Siberia. ‘Nature’ says this and other findings, “suggests that populations related to contemporary western Eurasians had a more north-easterly distribution.”

“The MA-1 mitochondrial genome” they reported, “belongs to haplogroup U, which has also been found at high frequency among Upper Palaeolithic and Mesolithic European hunter-gatherers and the Y chromosome of MA-1 is basal to modern-day western Eurasians and near the root of most Native American lineages.... We estimate that 14 to 38% of Native American ancestry may originate through gene flow from this ancient population. This is likely to have occurred after the divergence of Native American ancestors from east Asian ancestors, but before the diversification of Native American populations in the New World.” (From: Nature - International Journal of Science, January 2, 2014)

BBC News reported, “Dr Willerslev and a colleague obtained a sample from the boy's arm bone, extracted DNA and compared it with that of present-day populations. “When we sequenced this genome, something strange appeared,” he explained. “Parts of the genome you find today in western Eurasians, other parts of the genome you find today in Native Americans - and are unique today to Native Americans.” (The Mal'ta boy was found to be related to indigenous Americans, but not to East Asians.) ““Native Americans are composed of the meeting of two populations - an East Asian group and these Mal'ta west Eurasian populations," said Dr Willerslev. However, it remains unclear where this mixing took place. "It could have happened in the Old World, somewhere in Siberia obviously. Or, in principle, it could also have happened in the New World," he explained.” (From: BBC News, November 20, 2013)

Where does the evidence point?

The archeological and DNA evidences contradict the claims within the Book of Mormon and Doctrine & Covenants where they refer to the American Indians as Lamanites. The evidence points to the Book of Mormon’s story that links the American Indians with Israelites, as being false. The evidences show that the New World are not of Semitic Stock, but are of east Asian and Eurasian descent who migrated across the Bering Strait.

Seeing there are no DNA connections between Israelites and Native Americans, and that archeological findings demonstrate all migrational travels occurred via the Bering Strait, the overwhelming evidence reveals that the characters written about in the Book of Mormon are fictitious.

Even though this change has been made to their Introduction page, as you can see from clicking the Book of Mormon and Doctrine & Covenants links I provided above, their “scriptures” definitely declares the American Indians as Lamanites.

For more information, see Who Are Lamanites?

All our correspondences are treated respectfully and confidentially. 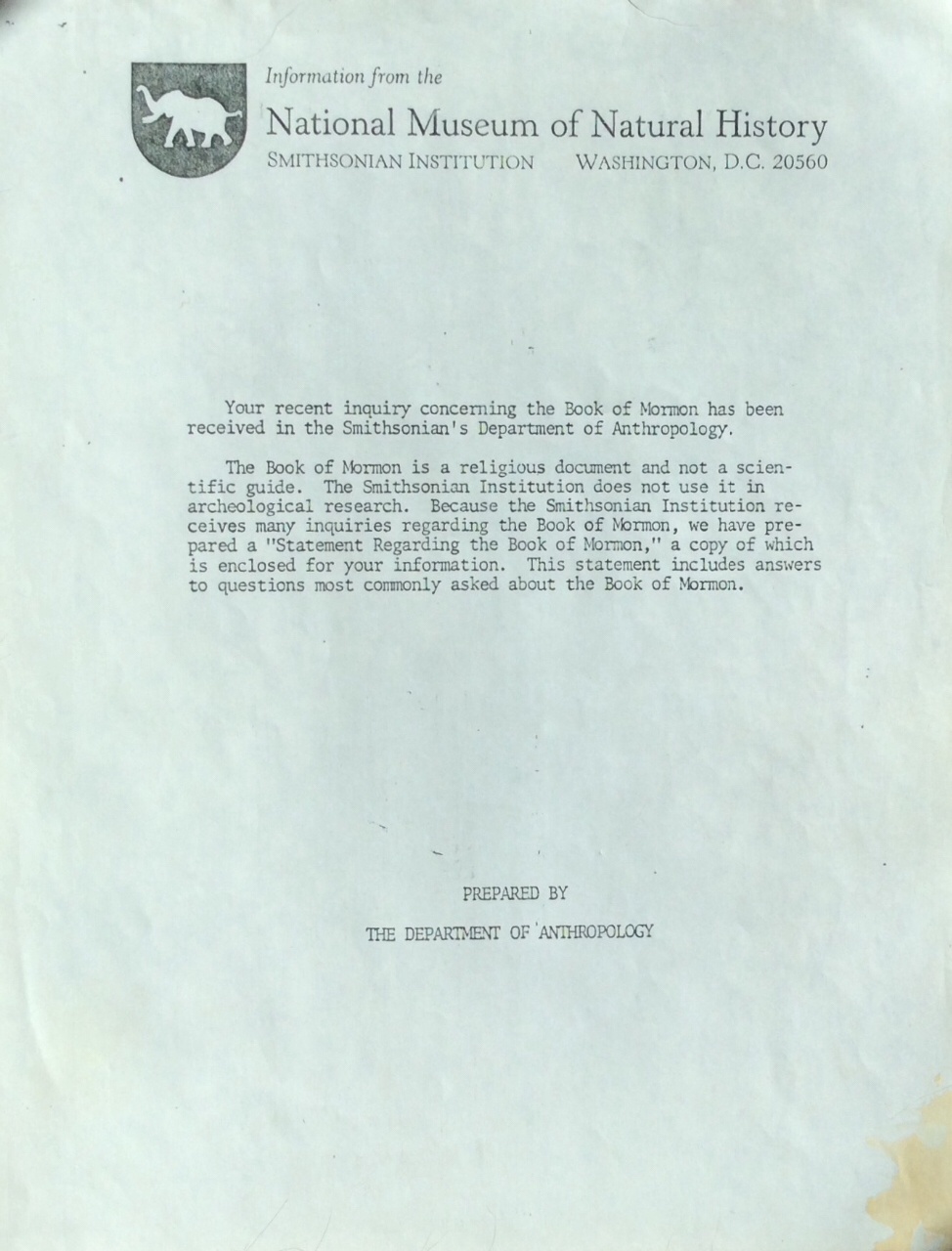 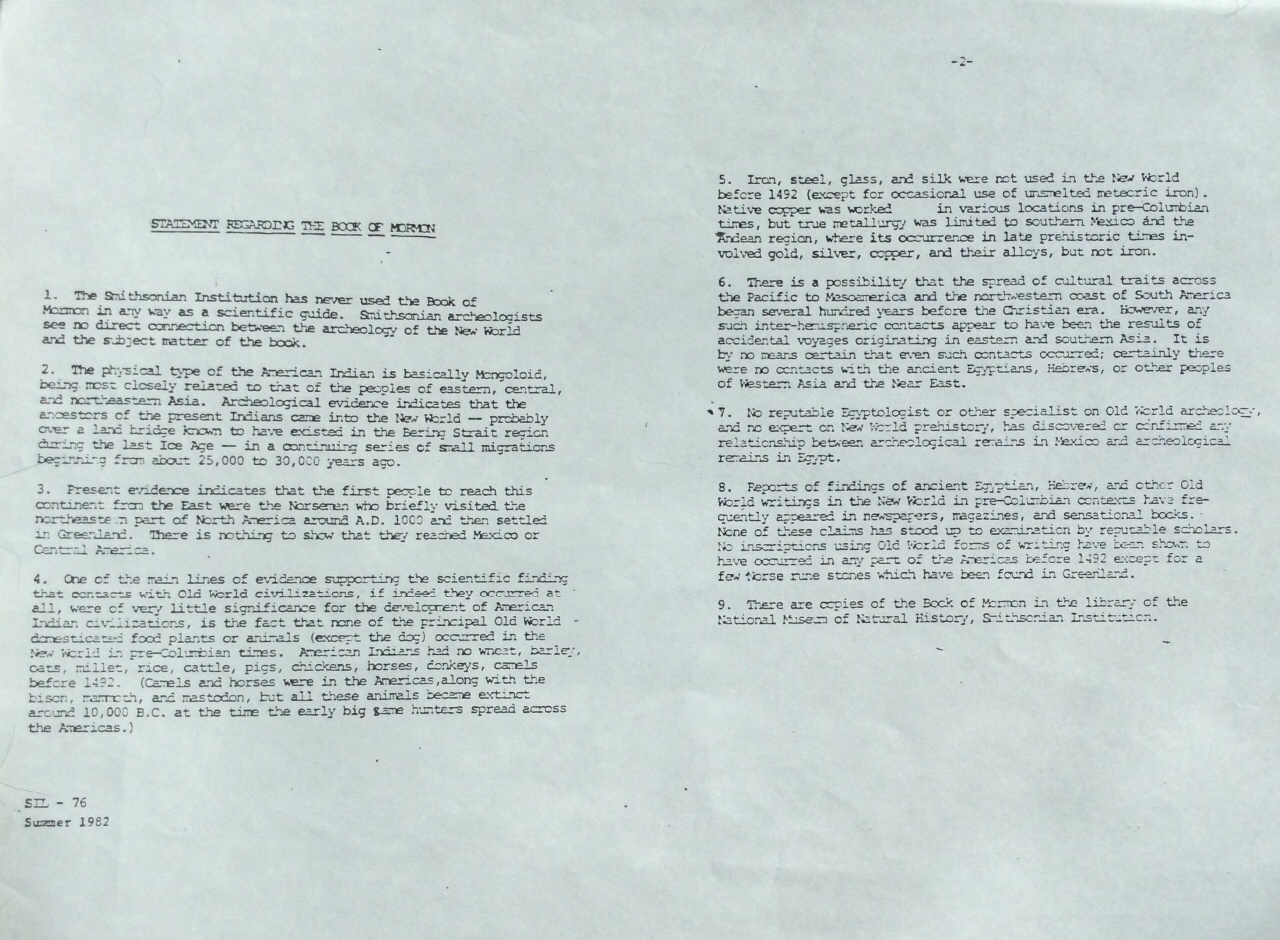